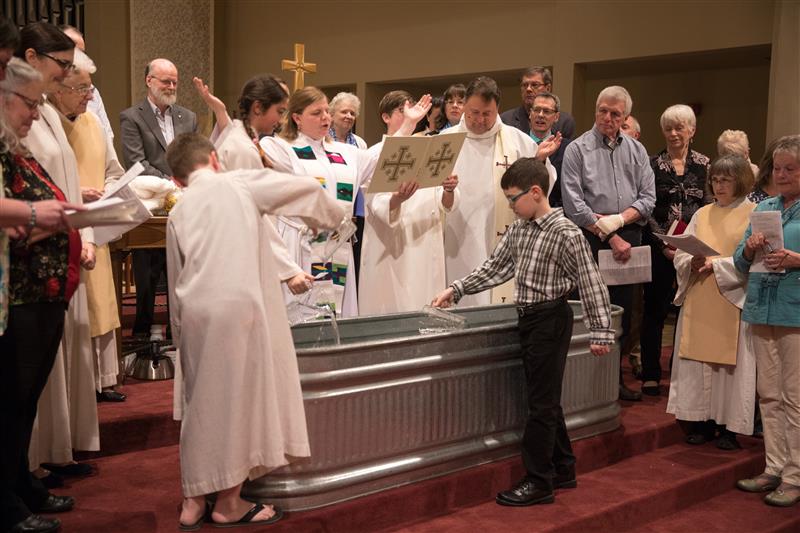 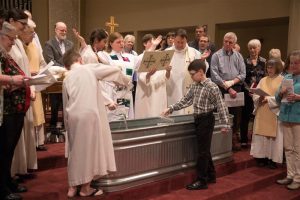 Phinney Ridge Lutheran uses a horse trough for baptisms.  It’s a temporary arrangement.  One day we will have a permanent font suitable for full immersion.  In the meantime, we pull a horse trough from the attic and place it in the assembly to be used at all baptismal festivals.

Like the vessel itself, a bit large and imposing, the journey to these baptismal waters is no small thing.  Asked to publicly renounce evil and confess their faith in the triune God, those who stand on the precipice of the baptismal waters at the Vigil arrive after a period of self-examination.  Prior to Lent, those in the Catechumenate process are asked to shape a Lenten discipline around the question, “What will I have to learn to risk or renounce in order to accept more fully what Jesus is offering?”

Bobby had participated in the Catechumenate since early Autumn.  Until this question was posed to him at the pre-Lenten retreat, he was pre-occupied with the prospect of being baptized in the horse trough.  It seemed silly and even offensive.  After the retreat, it suddenly dawned on him that the business of being baptized involved a whole lot more than being bathed in the trough.   It involved promises of fidelity to God and the church.   The renunciations and profession of faith were only the beginning of a lifetime journey of dying to the ways of sin and the powers that defy God.  What did Bobby need to renounce in preparation for his Easter baptism?  He discerned a need to renounce self-righteousness.  His attitude was getting in the way of receiving the gift of Jesus’ mercy and, curiously, his ill feelings around being baptized in a horse trough intersected with his Lenten discipline.

Bobby was familiar with horse troughs.  The one we use for baptisms was not unlike the many watering troughs he helped his father maintain on the ranches he grew up on in Hawaii.  Every morning Bobby woke up with the sun rising out of the Pacific Ocean through the picture window of his bedroom.  He grew up with a picture of the ocean as beautiful, vast, life-giving and sacred.  He also recalled a photo of his father being baptized in the ocean.  As a Hawaiian he felt deeply connected to that body of water.  What a stark contrast between his father’s baptism in the ocean and his impending baptism in a horse trough.  He felt that as a good person, he deserved a baptism in the ocean, just like his father.

Bobby discerned what it was that was standing in-between himself and what Jesus offers through the gift of baptism: “Could it have been made any clearer what I should be renouncing?  The decision to be immersed in the trough, in many ways was a true gift.  It was a release from pride and opportunity to be a child again, free from judgment and free from the responsibility of deciding what my righteous deeds had deserved me or what my identity as a Hawaiian had privileged me.”

St. Ambrose described the impressive fourth-century baptistry in Milan as a “noble holder of God’s grace.”  Bobby came to see the horse trough as no less noble.  With the community that had supported and mentored Bobby surrounding him, the vessel became an instrument of grace, helping Bobby make a humble turn.

In the process of discerning what he needed to renounce at his baptism, Bobby came to trust that his change of allegiance at the Easter Vigil was made possible not by whatever promises he would make but by the greater promise of God.  In reflecting on his baptism later, Bobby said, “For a few brief seconds suspended in the water of the baptismal pool I was weightless, free from self-righteousness.  Just my body.  And God was carrying me.”